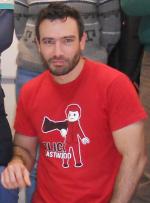 Short Bio:
Ariel Hernán Curiale graduated from the University of Buenos Aires, Argentina, where he obtained his B.Sc in computer science, in 2009. In 2011 he received the M.S. degree in  Information and Telecommunication Technology from University of Valladolid, Valladolid, Spain. He joined the the Laboratory of Image Processing, University of Valladolid, as a Researcher in 2010 with a Collaboration Fellowship granted by the Argentine Ministry of Education and the Caroline Foundation. He also received a scholarship from the University of Valladolid and has been a student visitor at the Erasmus Medical Center, Rotterdam for three months starting in September 2013. His research interest are focused on medical applications of image analysis. This includes local image structure using tensor analysis, image segmentation, and image registration.   The primary focus of his research has been in the area of signal processing and medical image analysis, especially the development of new algorithms and their application in clinical applications. Major applications of the research have included the areas of image segmentation, image registration and detection of thin-layered structures such as valvular structures. His thesis  focuses on two main tasks: (1) the characterization of the dynamic properties of the left ventricle and (2) the detection of different structures therein. For this purpose, methods for the estimation of motion and strain are proposed, as well as a method for identifying the different cardiac structures, such as the mitral valve, the long axis of the left ventricle and the aortic valve.