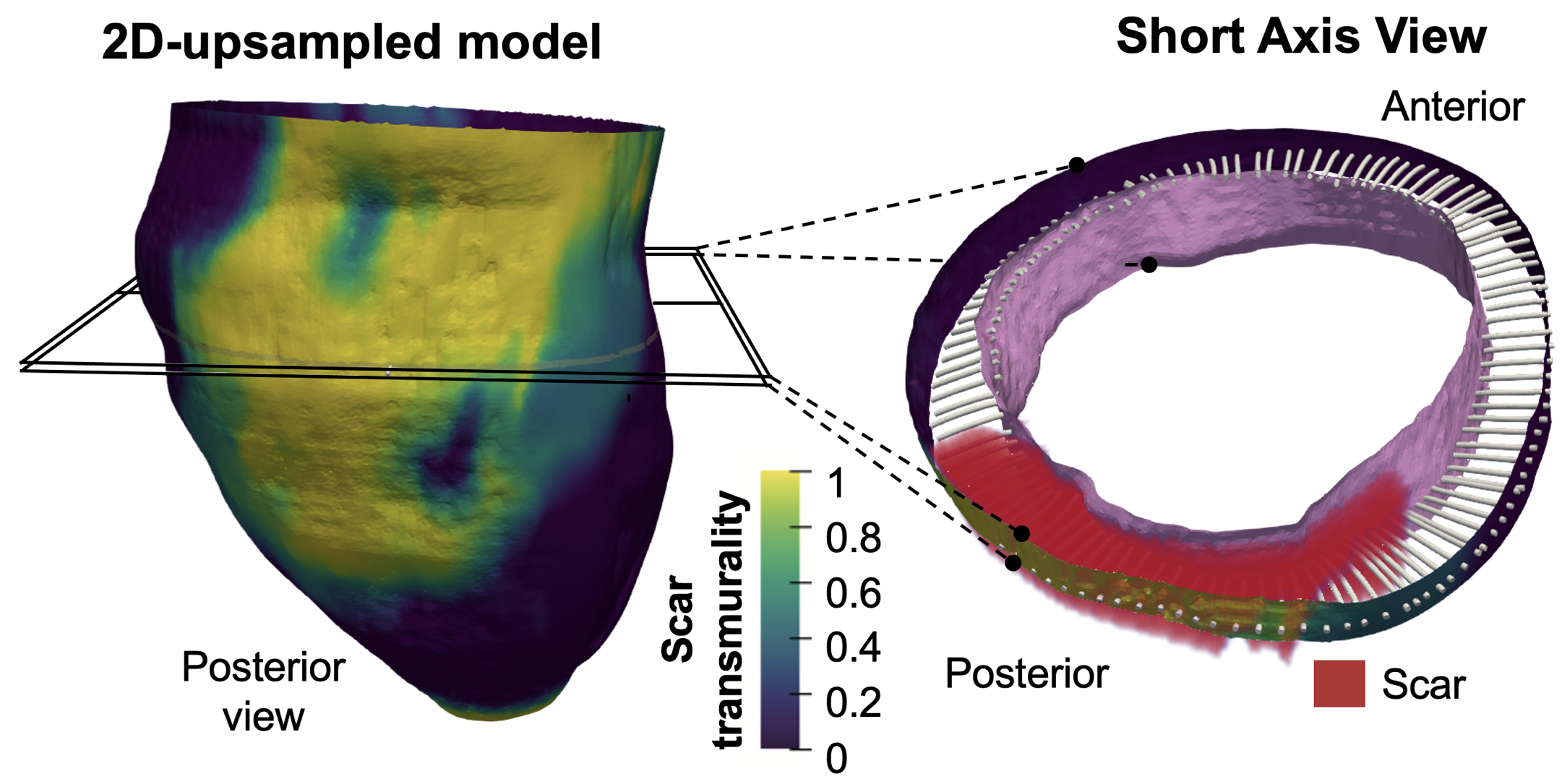 A multidisciplinary team of scientists based at the Universidad de Valladolid and the Centro Nacional de Investigaciones Cardiovasculares (CNIC) has developed a highly efficient method for identifying the 3-dimensional features of the scar tissue formed after a myocardial infarction. The study was carried out in partnership with scientists and clinicians at Hospital Clínico San Carlos, Hospital Universitario la Paz, Fundación Jiménez Díaz, Hospital Rúber Juan Bravo Quironsalud, the Universidad Politécnica de Madrid, the Centro de Supercomputación de Barcelona, Philips Healthcare Iberia, the CIBERCV, and the CIBERBBN.

The new method allows 3-dimensional transmural (across the ventricular wall) mapping of scar tissue in the infarcted muscle. Transmural mapping of the infarcted tissue enables highly detailed characterization of the morphology of the damaged tissue and provides an accurate measure of infarct size relative to myocardial wall thickness, a parameter known as transmurality.

According to CNIC scientist David Filgueiras, “a major advantage of this new method is its full compatibility with standard cardiac magnetic resonance (CMR) sequences that take just a few minutes to acquire. This approach can thus significantly shorten the time needed for image acquisition, easing access to in-demand nuclear magnetic resonance scanners.”

“This novel methodologya may provide an efficient approach in clinical practice after manual or automatic segmentation of myocardial borders in a small number of conventional 2D slices and automatic scar detection,” write the authors in an article published in Scientific Reports.

The results of the study show that low scar transmurality on CMR (below 10% of ventricular wall thickness for 3D sequences or 20% for 2D sequences) is associated with the clinical presentation of tachycardias involving infarcted ventricular tissue, known as ventricular tachycardias.

Describing the results, study first authors Susana Merino, of Valladolid University, and Lilian Karina Gutiérrez, of the CNIC, said that the results reveal a significant correlation between low scar transmurality and the cardiac frequency of patients with ventricular tachycardia.”

The results also show that patients with low scar transmurality values had a higher probability of ventricular tachycardia recurrences during long-term follow-up.

The new method is especially promising because it uses conventional 2D delayed gadolinium-enhanced CMR sequences and requires only a limited number of slices. This technology is available at all centers that carry out CMR studies, and the method does not require 3D CMR studies.

The method was developed through technical, experimental, and clinical collaboration under the umbrella of a specific partnership between Valladolid University and the CNIC. Joint lead author Carlos Alberola explained that the technical advances of the method are built on procedures developed in the Image Processing Laboratory at Vallodalid University, located in the Escuela Técnica Superior de Ingenieros de Telecomunicación.

“The first of these advances is a method for interpolating images that preserves topology. This allows high-resolution 3D images to be generated with a high level of precision from the images obtained with conventional CMR procedures.”

“A second advance is a mathematical method for characterizing fibrous tissue formed in the myocardial wall after an infarction. This tool provides a measure of the full 3D morphology of the scar relative to the thickness of the myocardium, a parameter known as transmurality.” The method uses a procedure based on partial differential equations to provide point-wise correspondences between the endocardium and the epicardium. These correspondences allow the definition of multiple indicators of the extent of the infarction.

The experimental arm of the study involved input from the Advanced Development in Arrhythmia Mechanisms and Therapy group at the CNIC, led by Dr. David Filgueiras. This group provided expertise in experimental models of myocardial infarction, essential for validating the methodology.

The CNIC laboratory also coordinated the study of the clinical application of the new method, in partnership with a multidisciplinary team of experts in the diagnosis and treatment of complex cardiac arrhythmias.

The University of Valladolid is a prestigious academic institution in Spain, with a consolidated teaching and research quality, as reflected in the global score achieved in several of the most relevant national and world rankings such as Shanghai, CYD or U-Ranking. With a complete educational offer in all the major branches of knowledge, the Higher Technical School of Telecommunications Engineers stands out, the only one in Castilla y León in which Bachelor and Master degrees of the Telecommunications family are taught.

More information at uva.es and tel.uva.es

The Centro Nacional de Investigaciones Cardiovasculares (CNIC), directed by Dr. Valentín Fuster, is dedicated to cardiovascular research and the translation of knowledge gained into real benefits for patients. The CNIC, recognized by the Spanish government as a Severo Ochoa center of excellence, is financed through a pioneering public-private partnership between the government (through the Carlos III Institute of Health) and the Pro-CNIC Foundation, which brings together 12 of the most important Spanish private companies.